A cost-effective way to reduce emissions.

Carbon offsets let you help build projects in communities across the country that reduce greenhouse gas (GHG) emissions beyond what you can achieve through individual action. Carbon offsets are purchased to fund these projects and diminish the impact of your own GHG emissions, even though the projects are located elsewhere. Carbon Offsets make environmental and economic sense- for emissions that are impossible to reduce, you can use funds to help reduce emissions elsewhere. 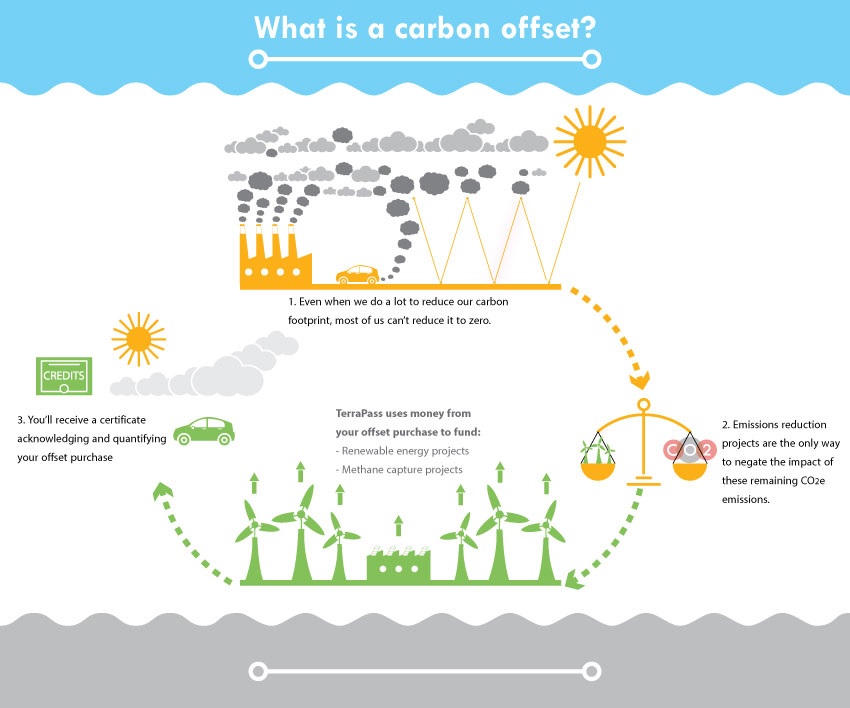 What is a carbon offset?

A carbon offset is a certificate representing the reduction of one metric ton (2,205 lbs) of carbon dioxide emissions, the principal cause of climate change. Carbon offsets are an important financing mechanism for Terrapass’s emission reductions projects. In fact, when selecting offset projects for funding, Terrapass employs the rules of additionality, meaning that these projects would not be built and operated without the money provided from the sale of offsets. Although complex in practice, carbon offsets are fairly simple in theory.

If you develop a project that reduces carbon dioxide emissions, every ton of emissions reduced results in the creation of one carbon offset. Project developers can then sell these offsets to finance their projects. There are hundreds of different types of carbon reduction projects. For example, a dairy farm can install an anaerobic digester to capture and destroy methane that would otherwise be released when animal manure decomposes. However, such anaerobic digester projects are typically expensive to install and maintain. In order to finance the construction and operation of a digester project, a dairy farm can sell the emission reductions in the form of carbon offsets.

Carbon offsets are therefore an available tool for individuals and organizations that wish to mitigate the impact of their own carbon footprints.

How are carbon offsets generated?

Emission reduction projects reduce the amount of greenhouse gases in the atmosphere in one of three ways:

Some projects include more than one of these activities at the same time.  For example, gas capture projects at landfills not only prevent the release of methane gas into the atmosphere, but they also use the captured methane to generate electricity that would otherwise be generated by burning fossil fuels such as coal or natural gas.

What types of carbon offsets does Terrapass support?

Farm Power
Terrapass works with farms in communities across the United States to make the best possible use of animal waste.  Through the use of anaerobic digesters, methane is captured as the manure breaks down and is then destroyed when it is burned as a fuel to produce electricity.  Additionally, these digesters can produce a variety of other products that help the farm and reduce environmental impact. The fibrous material can be separated, dried, and used as bedding, while the liquid effluent can be used as fertilizer.  Anaerobic digestion also aids local communities by helping to reduce water pollution and odor associated with animal husbandry.
Landfill Gas Capture
Landfill gas capture projects turn garbage into power. As organic waste breaks down, it releases methane, a greenhouse gas 84 times more powerful than CO2. According to the EPA, landfills are the third largest source of methane emissions in the United States. Through the installation of gas collection and control systems, these projects result in the destruction of powerful greenhouse gases, and the gas can be burned in a generator to create renewable electricity.
Clean Energy from Wind Power
Wind energy displaces electricity that is generated by dirty fossil fuels like gas and coal (the way that most power is currently generated in the United States). In this sense, the amount of carbon dioxide emissions that are avoided depends upon the “carbon profile” of the electricity grid where the energy is produced. The carbon profile of each regional grid is calculated periodically by the US Environmental Protection Agency by adding up the weighted average of carbon dioxide emissions from all commercial energy sources on that regional grid.
Improved Forest Management
Forests can sequester carbon dioxide (C02) in a variety of ways. Carbon is stored in the trunks, leaves, branches, and roots of trees. Carbon is also stored in the forest soil, understory plants, and green “litter” on the forest floor. An Improved Forest Management Project under the CAR Forest Project Protocol involves changing forest management practices to increase carbon stocks on forested land relative to baseline (or “business as usual”) levels of carbon stocks. In other words, Improved Forest Management helps forests sequester more carbon.